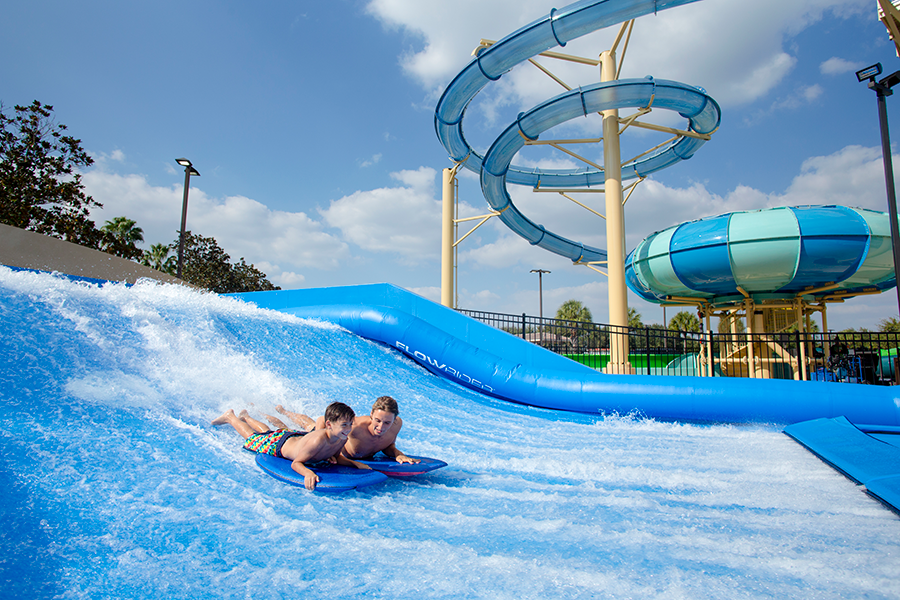 Gaylord Palms Orlando Partners With ADG To Add the FlowRider® to their Vast List of Recreational Offerings.

(Cohoes, NY) Aquatic Development Group (ADG) has completed a second phased expansion at the Gaylord Palms and Convention Center at the Cypress Springs Water Park adding a FlowRider® Double as part of a $4.2 million expansion that also included a new slide complex. ADG was the original designer and builder of the resort’s existing recreational waterfront areas, Cyprus Springs and South Beach.

As part of a $4.2 million expansion, The Gaylord Palms also added three new waterslides to their aquatic recreational area.

The resort’s new FlowRider® Double, “The Wake Zone”, forms the centerpiece of all the action around the pool. The world’s most popular flowboarding attraction, the FlowRider® creates the perfect setting at the Gaylord Palms for private events and family fun. With proven appeal across multiple demographics, particularly the key teen and young adult market, this popular skill-based attraction is a proven winner for driving traffic, encouraging repeat visitation and increasing length of stay. Popular with both participants and observers, it creates the perfect setting for generating additional revenue through branded retail and F&B sales.

“We’re always seeking new ways to improve our entertainment offerings for our guests” stated Johann Krieger, General Manager of Gaylord Palms in a press release earlier this month. “We know that in the Orlando market, visitor expectations are high and our resort intends to not simple meet those but exceed them.”

The Gaylord Palms will also be hosting the 2017 FLOW Tour USA on Saturday May 6th at their resort. This event will bring both professional and amateur competitors of all ages to the resort to spend a day on the wave, fighting for prizes and advancement in the tournament.

With a strong brand following, the FlowRider® is featured in the best of the best locations around the world- form Six Flags, to Royal Caribbean, to the Waldorf Astoria. FlowRider® brings heightened public awareness and immediate exposure to any property. A skill-based ride that keeps guests wanting to ride over and over, it is the type of attraction that can help increase occupancy and drive room rates.

For more information on both phased expansions at the Gaylord Palms, read the case study >>